Perhaps Gov. Terry Branstad doesn’t have a clear understanding of what a cliff effect is or how it hampers economic advancement.

Amid the flurry of veto activity before the holiday weekend and subsequent reactions, it’s likely the governor’s refusal to grant a 5 percent increase to the federal poverty level standards associated with child care assistance wasn’t on your radar. After all, what’s more important: limiting the ability of about 200 Iowa households to increase wages or shortchanging thousands of K-12 districts? In reality, they both are clear examples of how this administration’s policies hurt the working class it espouses to protect.

Campaigning in 2010, Branstad expressed concern over what’s known as the “ cliff effect ” in child care benefits. This cliff effect occurs when a working parent is offered a wage increase that will actually result in less family income. Accepting the promotion or better job offer results in a net income decrease because they place the worker over a threshold for state child care subsidies. 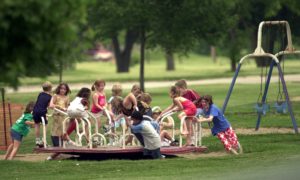 For instance, the worker might be bringing home an additional $100 each week, but the loss of child care assistance adds $200 in expenses ­— child care costs once paid through state assistance.

Once back in Terrace Hill, Branstad encouraged lawmakers to address this issue as part of his budget message. But, when lawmakers this year passed a budget that would extend eligibility for the child care subsidy program in Iowa from 145 percent of the poverty level to 150 percent, Branstad not only refused but erroneously cited the cliff effect as part of his reasoning.

Tucked near the bottom of the veto message he dispatched to the Iowa secretary of state was this note:

“…This item further enlarges the taxpayer-funded child care assistance program. We must support working families. More Iowans are working than ever before, and our families are seeing their incomes rise. Enlarging government programs that only further perpetuate the cliff effect felt by these families when their incomes rise and benefits are lost is not the right policy for Iowa. …”

As the saying goes: Mr. Disingenuous, we see what you did there.

Adding a general statement of support for working families isn’t proof the action helps Iowa workers, or their employers. Including the words “ cliff effect ” doesn’t mean the actions are intended to ease or solve the problem.

Many government subsidies, but especially child care subsidies, are in place to help people fulfill their own American dream and not become more dependent upon additional assistance programs.

And, to be fair, the legislative budget, although a step toward a more reasonable threshold, didn’t go far enough.

Iowa workers falling from the benefits cliff can expect a straight drop. There are no plateaus to ease them down, no consideration by the state to place child care assistance on a sliding scale.

As the governor says, here in Iowa we support working families — unless they work too hard and start to get ahead. When it comes to child care assistance, we set up government barriers that keep people from accepting hard-earned promotions or force them to work only a certain number of hours each week.

Meanwhile, across the river, Nebraska lawmakers are making headway. Gov. Pete Ricketts recently signed a bill into law that allows for child care benefits to phase out as incomes rise.

For those that don’t recognize it, that’s what supporting working families looks like.

This column by Lynda Waddington originally published in The Gazette on July 12, 2015.