Next week, six months, a year or five years from now, will it matter?

When I took my first journalism job and had difficulty deciding what to write about or lead with, my mother asked me that question. Even bedridden with bone cancer, she had a way of keeping her priorities straight, of separating the “littles” from the “biggies.”

In retrospect, it probably also was her way of encouraging my continued presence in the world outside of her bedroom, effectively making sure her youngest child didn’t become her full-time caregiver.

Throughout my life I’ve been handed various words of wisdom with a similar sentiment. “Forget everything that means nothing,” one of my first editors advised. My brother told me if I couldn’t change it, I’d best let it go.

In some ways, as trivia teammates will no doubt attest, I think I’ve followed the advice too well. In others, I hold too much of the trivial in my head and next to my heart.

That’s why I began the personal New Year pyre tradition outlined in a column last year. I write down anything “bad” from the current year, put the slips of paper in an envelope or box, and burn the whole lot today, New Year’s Day. 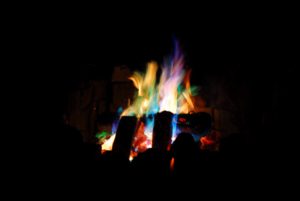 The exercise is a tangible way to let go of some of the useless baggage I’ve accumulated and to refocus my energy on more positive pursuits.

Last New Year’s Day marked a turning point in my life. Bits of niggling self-doubt, a host of personal shortcomings and long-term grudges were thrust into the flames. Spirit lifting alongside the smoke, I pledged to live in the new year in the same way my mother said I should report, by concentrating on the “biggies.” I vowed to immediately cast aside and leave behind unsolicited and unqualified assessments of my person, work or choices.

The prescription has been good medicine, even though there were days when I skipped a dose.

I’ve cut a few toxic people loose, pulled many more nurturing souls closer. For the first time in my life, thoughts about health have replaced thoughts of body image. That last piece alone, I think, was well worth the energy expended.

So, this year I will repeat the process. In fact, if everything is going as planned, I’m watching the smoke of 2016 “bad” as you read.

And this year I’m adding another step. I’ve realized that when I clean myself out, I’m not content with the void. Yes, I know this comes dangerously close to being a New Year resolution — a promise made to ourselves that’s courted for a few weeks and then summarily discard. But I’m not talking about a vow to visit the gym three times each week or to snack only on veggies.

I’m taking a page (actually all the pages) from David Foster Wallace’s speech, “This is Water.” This year I want to exercise my power “to experience a crowded, loud, slow, consumer-hell-type situation as not only meaningful but sacred, on fire with the same force that lit the stars — compassion, love, the subsurface unity of all things.” That is, I want to acknowledge that while it may seem like I’m the center of the universe, I’m not. None of us are.

Following Foster Wallace’s advice means making a choice each day not to relax into our self-centered default setting where everything and everyone as an obstacle to overcome. It requires a shift of think, an engagement of empathy so that we don’t miss the very integral and important things that are right in front of us.

On a more practical level, it means that I need to rethink my reaction to Iowa’s cursed winters. I’ll probably also need to give adults who wear pajama pants in public a pass, as improbable as that seems right now.

I’ll continue to discard toxic relationships with people who seek to only insult and injure, but will be more forgiving of good people who have bad days. Maybe, just maybe, I’ll experience the same courtesy.

It’s impossible for each New Year to be a truly blank slate. We log memories year after year, and no matter how much we erase, ghostly images remain. Our best hope is to rub off what we can, and use what remains as part of a better story for the next year.

This column by Lynda Waddington originally published in The Gazette on January 1, 2017.